Yes, Alexa Bliss had plastic surgeries in the form of a nose job and boob job. Check out the transformation in the images below. Were the cosmetic procedures worth it? At least the wrestler seems to believe so.

Alexa was born August 9, 1991 in Columbus, Ohio. Since the early age, Alexa did a lot of sports, such as gymnastics, softball, and kickboxing. As a teenager, Bliss experienced a serious eating disorder but managed to recover. Alexa Bliss is currently fighting at WWE rings. In 2017, Bliss got engaged to her boyfriend and fellow wrestler, Buddy Murphy. They make quite a handsome couple and we can’t wait to see their wedding.

Alexa Bliss has revealed that she got breast implants to help her recover from eating disorders that almost killed her when she was just 17-years-old.

Regarding her nose job, she was quoted as saying: “I had surgery, I had to get my nose all handled because, after six broken noses, it finally collapsed.”

Which plastic surgery procedures have Alexa Bliss done? Below we have compiled a list of all known facts about the stars beauty enhancements:

Check out these pictures of Alexa Bliss. Is there any plastic surgery involved?

There are times that I see comments on Instagram and Twitter – if you are bashing my character on television, that is fine. I am totally cool with that. I’m a bad guy for a reason. You are supposed to hate me, but when you disrespect me or my work or myself as a character as me personally, that is not okay. 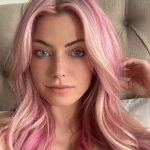 If I am with one person, I am very talkative, and personable. I will talk your ear off, but if there is another person interjected, I get so awkward. I am like the awkward one in those situations, but I feel like a lot of creative people are.

A lot of times, when we travel, a lot of people on the road have the Switch going. We will all connect on the Switch and play the games against each other. It’s obviously the healthier alternative than partying, but it’s great.

I feel like – I know I talk about it all of the time. Body issues, online bullying, it is a thing. People go through it.

I win when it counts.